Executing a test through Remote Desktop results in screen freezing

Hi
Two testers have KSE 8.4.1 installed on Windows 10 VMs (one each) and use Remote Desktop Connection to connect (connecting from Win 10 laptops).
The scripts are written via this desktop and then executed.
The problem occurs when scripts are executed - very regularly, the remote desktop connection will either freeze or be lost during script execution.
If a freeze occurs, the screen will stop updating but execution will still be happening in the background. Same if connection is lost, the scripts will execute. In both cases the connection must be re-established to see progress.
Reconnecting is not a problem, since session logs straight back in. And scripts appear to be unaffected. This is very annoying during the development stage though, since tester often misses any problems that would be visible on screen when script is running.
Copying in @duyluong since you managed to resolve another issue (not the same as this unfortunately): https://forum.katalon.com/t/test-is-stopped-automatically-after-close-the-windows-remote-desktop-connection/56653

I use VMs all day every day – but I don’t develop tests on them. I too lose connections occasionally but I blame HyperV, not Katalon. And I’ve never seen the screen freeze.

I would advise you to use RDTabs rather than the Windows Remote Desktop app. With multiple VMs it’s a must-have tool 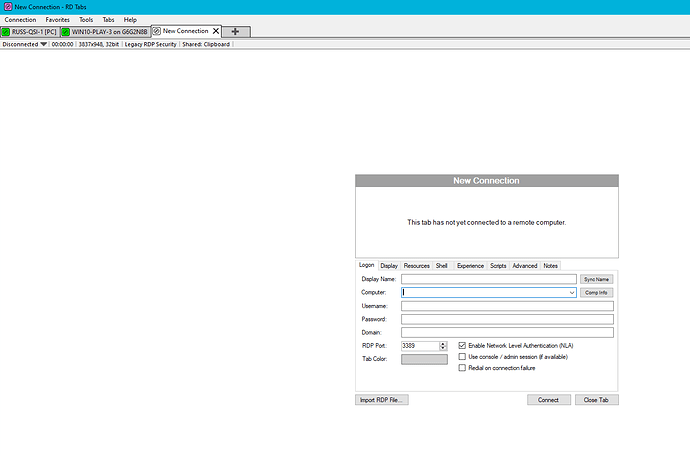 Hi Russ
thanks for the input and I would agree that Katalon isnt the cause, although I only just managed to crash it yesterday with any other software (a massive xml opening in Notepad++ was enough to reliably kill RDC). Possibly some Windows update recently, since all VMs were fine until few weeks ago… hmm.
Although i haven’t gone with the software you mention, we’re now moving off RDC.
Cheers Dan