Differences between chrome version on TSC

I run more than 10 test suit parallelly with firefox and chrome. Chrome version is differentiated between test suites. I want to run my test suite exact chrome version. My first opinion was firefox is causing the issue. When i execute firefox after chrome, chrome version was changed but i was wrong. It is changing randomly. It is blocking me to continue. 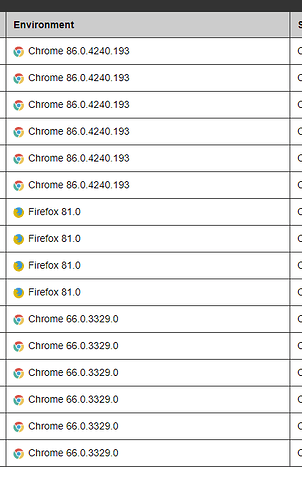 Are you executing locally ? Are you using any desired capabilities or any special set up ? Please provide the version of KS you are using.

No i dont use any special config. Just directly writing my scripts. i dont mention my chrome version on scripts. Also i can only chose one execution browser on TSC. I tried this on KRE and katalon studio on different versions. On KRE i tried 7.7.2.205 and 7.8.0.208 same error. On katalon studio i tried 7.7.0, 7.7.2 and 7.8.0 same error.

Also it show different versions on KRE. I think there is an internal chrome version caching that uses old version of chrome version.

But this is also awkward situation on KRE (inside docker image). Because according to official-docker-image-repo there should be only one chrome version. There shouldn’t be any other chrome version because chrome installed only once on docker image.

I checked desired capabilities on KS. I didnt make any special setup. It is on defaut configs.

Is there any update?