If you want to learn about Gradle from scratch, have a look at : 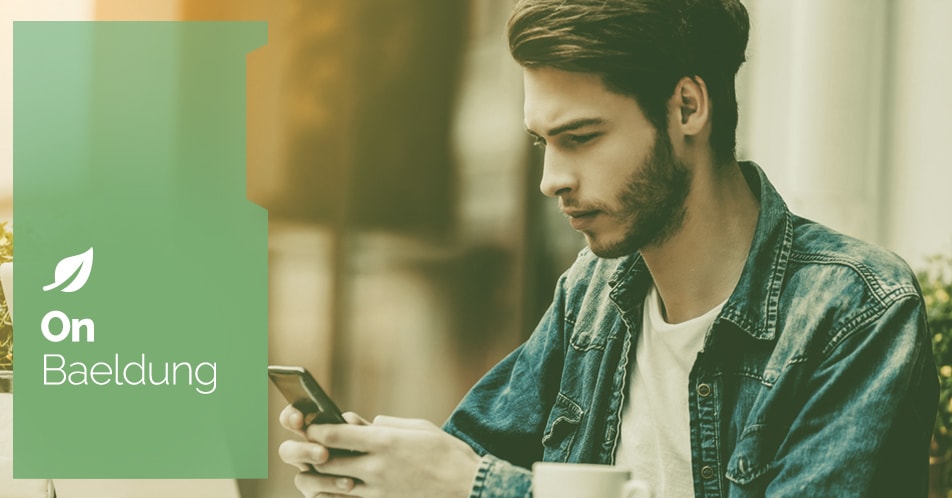 Discover core concepts of one of the most popular build tools - Gradle.

See the drivers task in my sample Katalon Studio project that uses Gradle to download external dependencies (jar files) from the Maven Central into the <projectDir>/Drivers folder:

This code would show you what you need to do to solve external dependencies with Gradle’s basic instruments.

The drivers task does near similar to what Katalon Studio Gradle plugin does.

By the way, 1 more question, why Katalon is still using 4.5.1, which is a pretty old version?

Thank you, @kazurayam. I’d already done something like that (I downloaded the Twilio API jar that includes org.apache.httpcomponents.httpclient_4.5.13 to the Drivers folder). I asked you for help with some info about using Gradle because you are one of the most knowledgable and helpful experts I know.

20h
"@em817m , I apologize for writing in your topic w/o having any solution. I’m just wondering is it the right aproach to have an encripted security key stored in Katalon Project? Whatever is encrypted can de decripted. Woudn’t it be safer to store a security key in some environment variable*?"*

What would be the best way to use secret API keys (needed to work with the Twilio API written in Java) so they can be used in the Katalon WEB scripts (not API scripts) that are to be run on Jenkins (with Katalon plugin) nodes that are used on demand?

What would be the best way to safely use secret API keys so they can be used in the Katalon WEB scripts (not API scripts) on Jenkins (with Katalon plugin) nodes that are used on demand? Katalon Studio

What would be the best way to safely use secret API keys (needed to work with the Twilio API written in Java) so they can be used in the Katalon WEB scripts (not API scripts) that are to be run on Jenkins (with Katalon plugin) nodes that are used on demand?

However, you should re-think if the password you have in your mind is REALLY serious one that must be strongly protected. Does it cost much money for you if the password is exposed public? In many cases, username/password pairs used for UI testing are not really worth hard-to-break security efforts; they may be just data.

Thank you, @kazurayam . If the credentials are stored just locally, how can they be used while running the scripts on Jenkins nodes (not the local ones) used on demand?

If the credentials are stored just locally, how can they be used while running the scripts on Jenkins nodes (not the local ones) used on demand?

use a vault. side note, jenkins have his own

Do you happen to know how exactly to store sensitive data both locally and, for example, in the (external)

you are confused. you have to figure it out what has to be local and what global.
i already gave the hints. do your homework.

Let’s say we need to pass “THE_MOST_SECRET_DATA” at runtime to Katalon (regardless of where it’s stored for the time being). How do we do that?

Is there some generic aproach that can be used regardless of where the sensitive data are stored?

If I were to make my local PC and my remote CI/CD server to share some information, I would store the information in AWS S3 storage. I would choose S3 because I am accustomed to it; others may choose Google Drive or something in Microsoft Azure. I would allocate restricted access permissions to the S3 storage by the AWS way.

I will write my test script code to read the information from AWS S3 storage. I know how to write my Groovy Test Case script so that they communicate with AWS S3. It requires a custom (a bit deep) coding technique. Unfortunately Katalon does not provide any built-in capabilty to use AWS S3.

Though you may ask a recursive question: how to manage the credential information that manages access to AWS S3 itself. Well, that is the first topic you need to learn for getting started with AWS in general. See the following article for example

Setting up for the Amazon S3 example walkthroughs.

Too much complicated for you? Then you should invent your own concrete way.

I have made a demo project in GitHub. GitHub - kazurayam/UsingAwsSdkInKatalonStudio: A katalon studio project. A test case calls AWS Java SDK for Amazon S3. External dependencies are resolved by using Gradle with com.katalon.gradle-plugin Problems to solve (1) I want to use Amazon S3 in my test cases My Visual Testing in Katalon Studio project enabled me to do visual regression testing. It compares 2 URLs of my AUT (production & development) visually in a time-slicing manner. Now I have…

Is there some generic aproach that can be used regardless of where the sensitive data are stored?

see the other topic: API/Web Service Encoded Variables - #15 by bionel

Thanks again for all your help, @kazurayam!

And, also, I’d just like to let you know that there is a very unpleasnt side effect of including twilio-8.34.1-jar-with-dependencies.jar in the Drivers folder

There is no HTML report in the Jenkins (with Katalon plugin) when twilio-8.34.1-jar-with-dependencies.jar is added to the Driver folder Katalon Studio

There is no HTML report in the Jenkins (with Katalon plugin) when twilio-8.34.1-jar-with-dependencies.jar is added to the Driver folder. That jar dependencies can be seen at https://repo1.maven.org/maven2/com/twilio/sdk/twilio/8.34.1/twilio-8.34.1.pom (e.g. : [image] Please note that, as per Can org.apache.httpcomponents.httpclient_4.5.1.jar be replaced with org.apache.httpcomponents.httpclient_4.5.13.jar and the .classpath be modified? - #3 by kazurayam, I also excluded the org.apache.http…

Logger.dtd (The system cannot find the file specified) while running a Jenkins job with Katalon plugin
kazurayam August 12, 2022, 12:15am #21

there is a very unpleasnt side effect of including org.apache.httpcomponents.httpclient_4.5.13.jar in the Drivers folder

I am sorry to hear that but I am not surprised with it. Changing the version of dependent jars is always risky.

Technically, it wasn’t changing the version of the dependent jar. When I excluded the org.apache.httpcomponents.httpclient_4.5.1.jar which was built-in out of the .classpath file, this exclusion didn’t cause any issue with the HTML report in our Jenkins (with Katalon plugin). The HTML reports dissapear only when twilio-8.34.1-jar-with-dependencies.jar is added to the Driver folder .

The only idea I presently have is to create a separate Katalon project for the test that uses twilio-8.34.1-jar-with-dependencies.jar and run 2 jobs in Jenkins (1.the regular job for the regular project w/o that jar 2. the job with the Twilio jar) 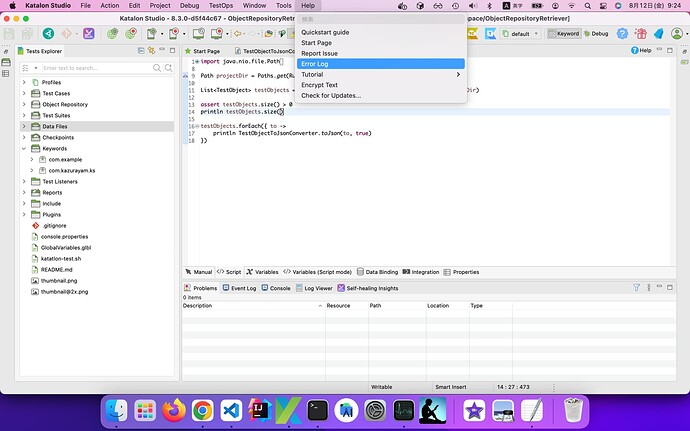 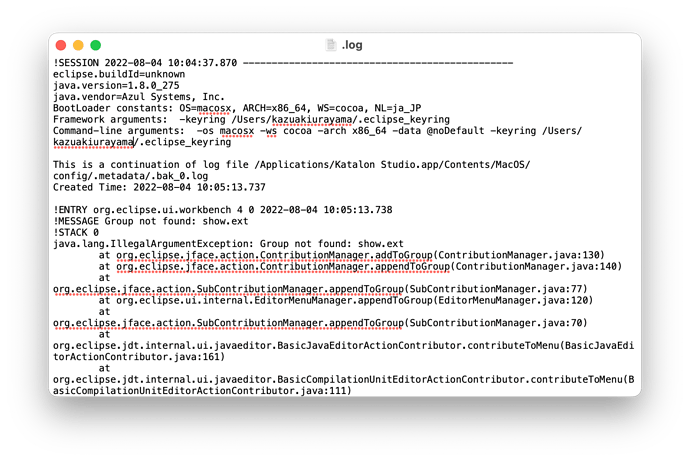 You may find some Stack Trace messages. It might suggest what happened. It might be good to know.

Though you would still find it difficult to fix the problem anyway.

The HTML reports dissapears only when twilio-8.34.1-jar-with-dependencies.jar is added to the Driver folder .

Are you aware of the content of the “-with-dependencies.jar” file?

I would guess it includes several OSS jar files, not only the httpclient, among them there could be some OSS product built-in Katalon Studio as well. If it is the case, you might have 2 versions of a single product. That would cause accidental collision of the version of the product.

I would personally never inject a “-with-depencencies” type of jar file into Katalon Studio, because I would loose control of dependent jar’s version.

I would advise you, you had better list up the dependent jar files contained in the “-with-dependencies” jar. Check the depentent jar and identify which one you need in Katalon project. And you want to include only those jars in Katalon Project which you desperately need.